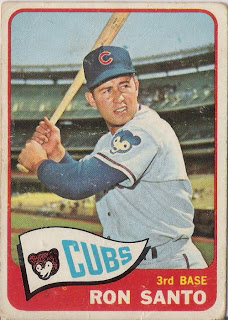 Today's Nitty Gritty Card of the Day is card #110 of legendary Chicago Cubs third baseman Ron Santo. I have long coveted this card and the thing is, when people get a nice old Santo card, they don't want to part with it...

This one came my way via the Cardboard Junkie and it brought friends! I think everyone is well aware of Santo's accomplishments on the field. He was THE BEST third baseman in the National League during the decade of the 1960s. He is one of the best all around thirdbasemen of All Time. He never won a ring, but he was loyal to the Cubs for nearly his entire career and got as close as a Cubs team could get.

I'm not going to write much more, just that Ron Santo epitmozed Nitty Gritty, he Belongs in the Hall of Fame and he is missed on this earth. Thanks dayf for this awesome card! I love this hobby! 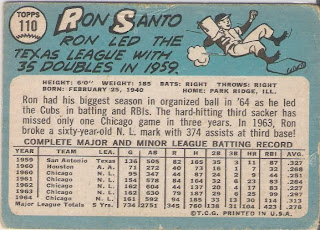 I love this set and I LOVE this card! 45 years LATER!
Posted by Collective Troll at 6:34 PM