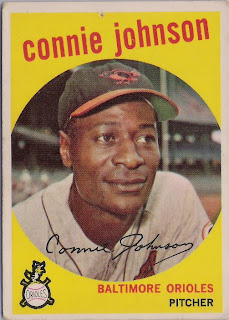 Today’s Nitty Gritty Card of the Day is card #21 from 1959 Topps Baseball of Baltimore Orioles starting pitcher Connie Johnson. A tall and lanky right-handed pitcher, Clifton “Connie” Johnson broke into the Major Leagues with the Chicago White Sox in 1953 at the age of 30.

Johnson began his professional pitching career in 1940 when he was just 17 years old. That same year he pitched in his first All Star game, pitching one shutout inning in the 1940 East West All Star Game. At age 19 he was part of one of the greatest pitching staffs in baseball history. Along with Hall of Famers Satchel Paige (36) and Hilton Smith (35), Johnson (19) helped the 1942 Kansas City Monarchs sweep the Homestead Grays in the ’42 Negro League World Series. His fastball was legendary and he and Smith and Paige were among the greatest fireballing strikeout pitchers of their time.

After the ’42 Series his pro baseball career was interrupted by World War II where he served for 3 years. He returned and rejoined the Monarchs in 1946 soon after Jackie Robinson had been signed by the Dodgers. Johnson was able to return to form after missing so many prime years to the War. In 1950 he pitched the middle 3 innings in the last ever East West All Star Game. He struck out 3 as the West won 5-3. Johnson took the win and hit a triple to help his own cause.

The next year he was signed by the White Sox organization. He made his MLB debut at age 30, but his arm was tired and sore and his velocity was nowhere close to where it was before he went to war. He put together a record of 11-9 in 2-1/2 seasons in Chicago before being traded to Baltimore in 1956. 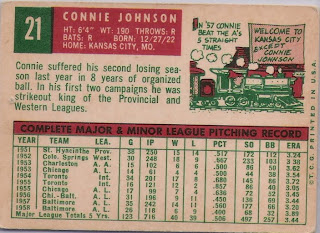 Eating all of those innings irritated his already sore arm and 1957 would not only be his best big league season, it would be close to his last. He pitched in just 118 innings in 1958. That would be his final year in the major leagues. He did pitch several more years in AAA and still had success as he approached 40 with a damaged right arm. He retired after the 1961 season, 22 years after his pro debut. His career line in the Major Leagues was 40-39 with a 3.44 ERA and 497 strikeouts.
A tiny bit of intrigue before I sign off… When I Googled Connie Johnson to do this post I found out that there are 2213 Connie Johnsons living in the United States. Johnson is the 2nd most popular last name in the country while Connie ranks 150th in popularity. Johnson was born Clifton Johnson and pitched under that name during his interrupted 10 year career with the Kansas City Monarchs. I don’t know when, where or how he picked up the name Connie. Anybody know?
Okay, that is all for now… For those of you who don’t know, I obsessively collect ANY and ALL alumni of the Negro Leagues and love uncovering the stories left behind from these Legends. From a teenage phenom to a crafty veteran hurler, Clifton “Connie” Johnson epitomizes all that is Nitty Gritty. I love this game, I love this hobby! I love ’59 Topps! 51 years LATER!

Posted by Collective Troll at 11:23 AM