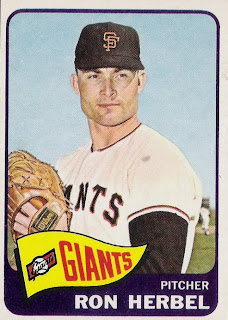 Herbel had a 9 year big league career, mainly with the Giants. He was a very active pitcher, beginning as a spot starter with San Francisco in 1964. Statistically his best year came when this card was released in 1965 when he was 12-9 with a 3.85 ERA in 47 games, 21 of them starts. As the decade progressed he pitched more and more out of the bullpen. He was most active in 1970 with the Mets and Padres. He was 9-7 in a league leading 76 games. He made one start, finished 38 games and notched 10 saves that season. His career record is 42-37 over 331 games with 11 complete games, 3 shutouts and 16 saves. 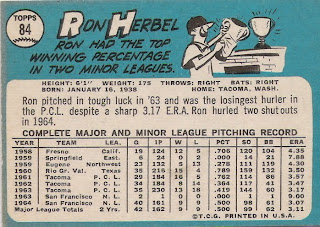 Borrowing a line from Heartbreaking Cards of Staggering Genius, "Everybody’s Got a Record". Mr. Herbel’s record is a dubious one… Over his 9 year career as a pitcher in the National League Herbel appeared in 332 games, he also went to the plate 225 times. When you take away the few times he walked and laid down a bunt, he had 206 at-bats and hit safely 6 times… Yep, over his career Herbel was 6 for 206 at the plate. He hit 2 doubles and drove in 3, but his .029 batting average is the WORST career mark for anyone with over 100 at bats. His best year came in 1967 when he had 3 hits in 28 at bats (.107) including 2 doubles, but he had many lean years. He went three full seasons (’68-’70) without a hit in 33 at bats.

Being good enough on the mound to be that bad at the plate makes Ron Herbel Nitty Gritty… I love this game; I love its history and I LOVE this hobby! 45 years LATER!
Posted by Collective Troll at 10:46 PM