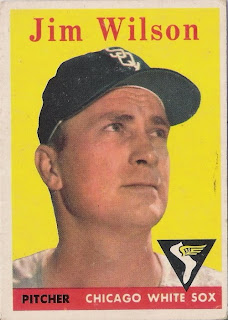 Today’s Nitty Gritty Card of the Day is card #163 from 1958 Topps Baseball featuring White Sox pitcher Jim Wilson.
You don’t get much more Nitty Gritty than Jim Wilson.
As a rookie with the Boston Red Sox, Wilson was struck in the head by a line drive off the bat of Hank Greenberg. The ball fractured his skull and Wilson nearly lost his life.
The ball was hit so hard, Wilson said he never saw. It reportedly left a dent in his head ¼” deep.
The road to rehab was long and hard, but Jim Wilson fought through it to make it back to the big leagues. He suffered another setback in May of 1947 when he was struck in the leg by another line drive, fracturing it.
After the injuries Jim Wilson had a couple of short cups of coffee in the majors, appearing in a total of 8 innings for 3 different clubs over 3 seasons, but he let it be known he was ready for sure after a spectacular year for the AAA Seattle Rainers in 1950. Wilson posted a record of 24-11 with a 2.95 ERA, 26 complete games, 8 shutouts and 226 strikeouts. The big club noticed and he began the 1951 season with the Boston Braves and started 15 games for them.
In 1952 he became a regular part of the Boston Braves rotation and started 33 games, completing 14 of them. He battled more injuries while moving with the Braves from Boston to Milwaukee. In 1954 he only started 19 games, but had 4 shutouts, an 8-2 record and hurled the first no-hitter in Milwaukee Braves history. Not bad considering he was on a staff that included Warren Spahn, Lew Burdette and Gene Conley. That same year he would make his first of 3 straight All Star appearances. 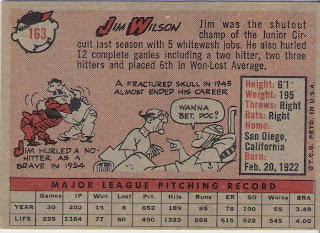 He would be sold to the Orioles and then traded to the White Sox. He had his best statistical season in 1957 for the Sox when he posted a 15-8 record with a league leading 5 shutouts.
1958 would be his final season in the big leagues. He would retire after a career that survived two career and life threatening injuries and would go on to pitch until he was 36 and a 12 year veteran. His final tally: a record of 86-89 with 19 shutouts for 5 different organizations.
After his time as a player Jim Wilson spent 2 seasons as the Milwaukee Brewers general manager prior to becoming the first head of the Major League Scouting Bureau.
I love this game, I love this hobby and I love nitty gritty players! 52 years LATER!
Posted by Collective Troll at 9:11 AM