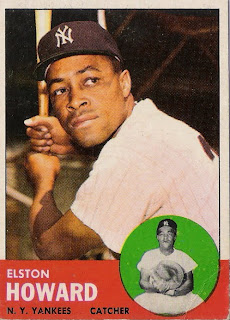 Today's Nitty Gritty Card of the Day comes from 1963 Topps Baseball, card #60 of New York Yankees catcher Elston Howard. One of the greatest catchers of All Time, Howard played on Pennant Winning teams in 10 of his 14 seasons in the Major Leagues. The back of the card mentions that he had hit 5 World Series homers. Playing in 10 different Series, Howard hit 5 homers with 19 RBI and won 4 rings as a World Champion with the Yankees in 1956, '58, '61 and '62. In 1963, the year of this card, Howard batted .333 in the Series, but his Yanks fell to the Dodgers in a 4-game sweep. Howard did have his finest year at the plate in power output hitting a career high 28 homers in 1963. It was his third straight year with 20 or more homers and his 7th straight season being named an All Star. Howard would take home a Gold Glove Award in '63 as well as American League MVP honors. Elston Howard was traded from the Yankees to the rival Red Sox in 1967 and became a veteran leader during their impossible dream Pennant run. Howard would retire after the 1968 season. Over his 14 year career Howard was a 12-time All Star and was a member of 10 different Pennant winning teams. 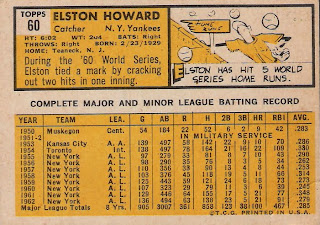 After retiring as a player, Howard returned to the Yankees as a coach and would win two more World Series rings in the late 70's. He retired with a .274 batting average, 167 home runs, 1,471 hits, 762 RBI, 619 runs, 218 doubles, 50 triples and a .427 slugging percentage in 1,605 games. Any player who spent time in the Negro Leagues is automatically Nitty Gritty as are war veterans and World Champions. Howard was all 3 and a classy individual to boot. He looses some points for being a Yankee, but...
I love this game, I love this hobby! 47 years LATER!
Posted by Collective Troll at 1:22 AM