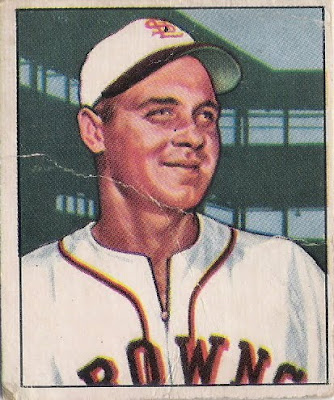 The Nitty Gritty Card of the Day comes from 1950 Bowman. It is card #190 of St. Louis Browns outfielder Ken Wood. Not to be confused with the stereo company, Ken Wood was an outfielder who played in the Major Leagues for 6 seasons from 1948 till 1953. His best years came with some really bad Browns teams. In 1951 he led the last place Browns in homeruns with 15. He was actually the only player on the team with double digit homers. Ned Garver somehow won 20 games that year, account for more than 30% of the Browns wins. Wood showed serious power in the minors, as mentioned on the card back. He belted 32 homers for the AAA Baltimore Orioles in 1949. Did I mention his name is Ken Wood? 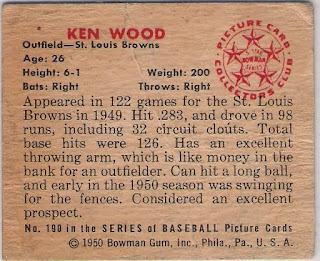 I love this hobby! 60 years LATER. Nitty Gritty out.
Posted by Collective Troll at 4:15 PM