Nitty Gritty Card of the Day 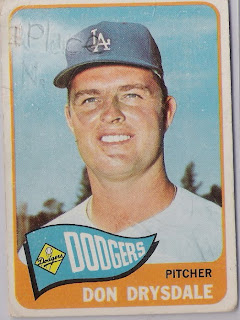 Today's Nitty Gritty Card of the Day once again comes from my favorite Topps set of all time, 1965 Topps Baseball. It is card #260 of Hall of Fame hurler Don Drysdale. My want list for this set stops at 252, so I didn't get to scratch this card off, but considering I how 83 cards from #1 up to 100, I think I might add another 36 cards (4 pages) to my list.

Most of my '65s have come from my local card shop - he has a knack for finding big lots in decent condition at good prices and ALWAYS calls me when these blue backed beauties walk in. This particular card was a gift to myself courtesy of an auction site. I had a gift card with $2.77 left on it so I started searching the 'Bay and I set the parameters to look for cards with free shipping ranging in cost from .01 up to $2.77. I searched key word 1965 Topps and within the first page I found this card. I really couldn't believe it. This 45 year old piece of cardboard was mailed to me for LESS than the cost of a single pack of 2010 Topps baseball. That blew me away.

The value makes the card better, but what makes it great is that it is in fact a card of Don Drysdale. Truly one of the best ever. 1965 was one of his best seasons, too. The back of the card mentions that DD hit 7 homers in 1958. The cartoon proclaims the hurler as Ruthian. Well, in 1965 he equaled that total and did it with an amazing stat line, batting .300 with 7 homers, 19 RBI, 18 runs scored and a .508 slugging percentage. 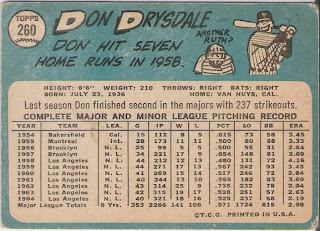 On the mound in '65 he was 23-12 with a 2.77 ERA in 42 starts. He threw 20 complete games, 7 shutouts and struck on 210 batters in over 300 innings pitched. His Dodgers finished 1st in the National League - a fact that is documented in pencil in the top corner of the card. That is probably the reason I was able to snag this card for under 2 bucks. DD and the Dodgers followed their hot season into the World Series and beat the Twins to win Drysdale his 3rd ring with the Dodgers. He was Los Angeles' game 1 starter, but got knocked out quickly. He returned to start Game 4 and pitched a complete game 5 hitter, striking out 11 Twins as the Dodgers won 7-2. Don Drysdale would retire a couple of years after this card came out.

He spent his entire 14 year career with the Dodgers in Brooklyn and LA. Over that time he was a 9 time All Star and started the game 5 times. He won 12 or more games 12 years in a row and struck out more than 200 batters 6 times, leading the league in that category 3 times. He retired in 1969 at the young age of 32, a time when many pitchers are just finding their stride. He left behind a career tally of 209-166 with a career ERA of just 2.95.

Despite his early exit from the game, he ranks in the top 30 of All Time in several categories. His 2486 strikeouts are 30th best, while his 49 shutouts is 21st best. His scariest stat is the unfortunate 154 who were hit by Drysdale. He led the league in hit batsmen 5 times and ranks 18th All Time in that category and I bet each of the 154 victims will never forget that experience.

Don Drysdale was finally voted in the National Baseball Hall of Fame in 1984, his 10th year on the ballot. I have only seen him pitch in videos of classic games, and it isn't possible to capture his brilliance on the field in a short blog post, but he epitomizes Nitty Gritty.

Posted by Collective Troll at 2:09 PM