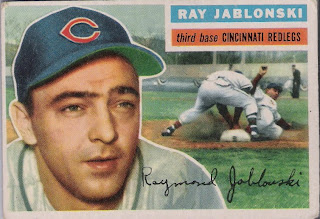 Today’s Nitty Gritty Card of the Day is from 1956 Topps Baseball, card #86 of Raymond Leo Jablonski, third baseman of the Cincinnati Reds. While searching for Play at the Plate cards from 1956 Topps, I came across this gem, which appears to be a play at third base.

I believe that is Jabbo putting down the tag on the base runner, but I have never been sure. This card has always confused me. I wasn’t alive in 1956, but I always thought that the Redlegs wore red hats or at least white hats with a red C, not a blue hat. I had wondered if it was error, but looking around I have noticed that just about every Red in this set is wearing a blue cap. Hmm…

Jabbo’s professional baseball career began in 1947 in Class D ball with the Red Sox organization. Unlike many players whose career was interrupted by World War II, Jablonski served 2 years overseas BEFORE his playing career. When he did his career going he spent 6 years in the minors, the first five in the low levels. He spent 1951 in the B League where he hit .363 with 28 homers and was voted Carolina League MVP. After that season he jumped to AAA with Rochester in 1952 where he hit .299 with 10 triples, 18 homers and drove in 103.
Those numbers were good enough for him to begin the 1953 in St. Louis with the Cardinals. He had a remarkable campaign as a 26 year old rookie third baseman. He tied a rookie record by playing in 157 games. He went to the plate 640 times and batted .268 with 21 homers and 112 RBI to place himself second on the Cards behind Stan Musial. He would place 3rd in the National League Rookie of the Year balloting behind Junior Gilliam and his 20 game winning teammate Harvey Haddix. His team would win 83 games, but ranked third in the NL with Brooklyn taking the flag.

As a sophomore Jabbo avoided the jinx and was the NL’s starting third baseman in the 1954 All Star Game. In the 4th inning of the AS Game Jabbo singled off of Sandy Consuergra, drove in his teammate Stan Musial and pulled the NL within 2 runs of the AL making the score 4-2. Jabbo scored when the next batter, Jackie Robinson hit a bases clearing double to tie the score. The AL would win the game 11-9 after Nellie Fox drilled a 2-run single in the bottom of the 8th. 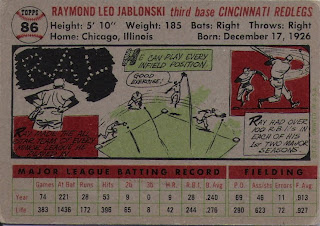 After his All Star season (.296/12/104) the Cardinals traded Ray Jablonski with Gerry Staley to the Reds for reliever Frank Thomas Smith. Jabbo never was the same player after that trade. He became a journey man and bounced to 5 different teams over the next 6 seasons. His best year came in 1956 when he hit .256 with 12 homers and 66 RBI for the Reds. Jablonski would leave the big leagues after playing in just 21 games for the KC A’s in 1960. He would stick around and spend 4 more years at the AAA level where he topped 20 homers 3 times, but his major league career was complete. He owned a .268 batting average with 83 homers and 438 RBI for his career.

Jablonski was never known for his glove, but the back of the card tells us that he could field at every infield position and he did. When your Nitty Gritty, you go where your needed – you tell your Coach you wanna play, you don’t care where, you are there to drive in runs and win ballgames.

Raymond Jablonski died young, in 1985 of kidney failure. He was a World War 2 vet, serving in France, and a Major League All Star AND a Nitty Gritty ballplayer. Jablonski is also, now, the first player page that the Nitty Gritty has sponsored on Baseball Reference. I love this game, I love this hobby! 54 years LATER!

Posted by Collective Troll at 2:35 PM