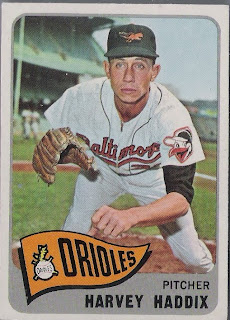 Today’s Nitty Gritty Card of the Day comes from 1965 Topps Baseball and features Baltimore Orioles reliever Harvey Haddix. At 39 years old, 1965 was Haddix’ final season in baseball and he spent it in the bullpen in Baltimore with Don Larsen, Dick Hall, Stu Miller and a 19 year old named Jim Palmer. Haddix had been a successful starter for a decade before moving to the pen and in ’65 he was coming off a remarkable season. He was 5-5 with a 2.31 ERA and 10 saves. He appeared in 49 games for 89 innings striking out 90 against 23 walks.
The Orioles were Harvey Haddix’ 6th and final team. His career spanned 14 seasons and started off with the Cardinals in 1952 pitching in 7 games. He returned to St. Louis in 1953 as a 27 year old starter and still held onto to his rookie status. He had one of his best seasons on the mound of his storied career that year. He appeared in his 1st of 3 straight All Star Games and finished second to Dodgers second baseman Junior Gilliam in the Rookie of the Year voting. Had the Cy Young Award existed in ’53, he would have received many votes for that a
ward as well. As a rookie Haddix posted a 20-9 record with a 3.06 ERA. He completed 19 games, including a league leading 6 shutouts. 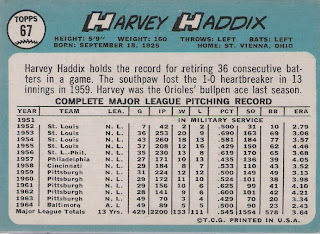 After his success in St. Louis Haddix was traded twice before ending up on the Pittsburgh Pirates in 1959. It was with the Bucs that Haddix pitched one of the most famous games in MLB history. On May 26, 1959 Haddix pitched 12 PERFECT innings against the Braves before yielding a hit and losing the game in the 13th inning. He holds the MLB record for retiring 36 consecutive batters in a single. A record that likely will never be approached.

He took the loss in that famous game, but the next year he was on the mound for the win (in relief) for another famous game. The Pirates walk-off World Series win against the Yankees in the 1960 World Series. The Pirates won the Series and Haddix’ owned a 2-0 mark against the Yankees in the Series. That would be his only ring as a player, but Haddix would earn another with the Pirates in 1979 as their pitching coach.
Over his 14 year playing career Harvey Haddix was a 3-time All Star, a World Series Champ, a 3 time Gold Glove award winner and drove in 64 runs as a hitter. A great hitting pitcher and all around athlete. Haddix was known as one of the top fielding pitchers of his era. His career mark is 136-113 with a 3.63 ERA. He pitched 99 complete games and 20 shutouts and struck out 1575 against only 601 walks.
He was nicknamed Kitten early in his career as he resembled a young Harry “the Cat” Breechen.
Pitching in 2 of the most memorable games of all time and a 14 year career as a starter and then reliever, a World Champ and an unbreakable record all combine to make Harvey Haddix as Nitty Gritty as they come. This blog is proud to sponsor his Baseball Reference page.
I love this hobby! 45 years later.
Posted by Collective Troll at 9:35 AM