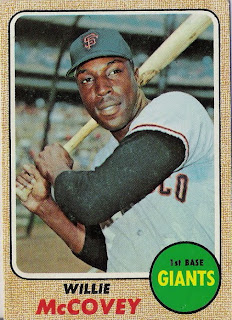 Willie McCovey's career started in 1959 with the Giants where he played in just 52 games but still managed to be the unanimous choice for Rookie of the Year after posting marks of (.354/13/38) in his short time on the field. Starting with a bang Big Mac never fizzled. He played for 22 seasons in the Major Leagues, 19 with the Giants, from 1959-1980. 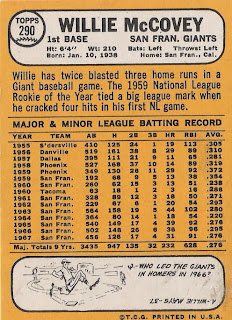 He is one of only 3 players to hit homers in 4 different decades. He was the NL's homerun king 3 times and hit 521 for his career. He also hit 18 grand slams, the most by any player in the National League. McCovey made it to the World Series 1 time over 22 seasons, in 1962 when he was platooning with Orlando Cepeda. McCovey batted only .200, but did homer in the Giants effort. San Francisco would fall to the Yankees in 7 games and Big Mac would never return to the Series.

Stretch McCovey retired after the 1980 season and was elected into the Hall of Fame in 1986, his first year on the ballot. Last night over 50 years after Willie McCovey stormed into the big leagues, the Giants won a World Series, and after half a century in MLB Stretch got his first ring. Congratulations the Giants winning their first World Series since 1954 - finally proving they could win without Willie Mays and Monte Irvin.

Oh, by the way - they don't name a Cove after you if you ain't Nitty Gritty. I love this game, I love this hobby! 42 years LATER.

Posted by Collective Troll at 11:36 AM