The Wonderful Willie Nitty Gritty Card of the Day!

Today’s Nitty Gritty Card of the Day comes from the 1967 Topps set; it is card #397 of Willie Smith. 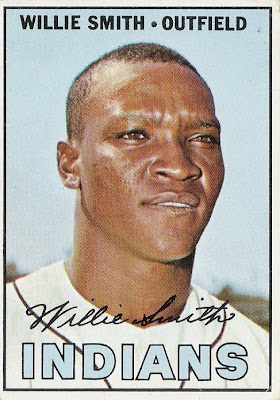 At first glance this card doesn’t fit the standard Nitty Gritty criteria. I hate cards of players without hats. I am going to consider Willie a victim here and not hold it against him, though. I will assure you in advance that Mr. Smith is plenty Nitty and abundantly Gritty. I just wish the shutterbugs at Topps realized this as I do...
Of the 9 standard Topps releases Willie Smith had, 4 of them he was shown without a hat. After a decent looking card in '65 they shot him bare-headed in '66. 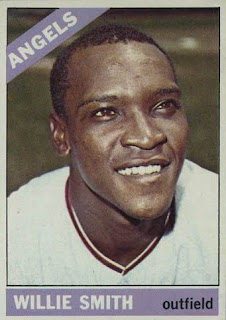 They continued that trend for 3 more years and in fact Topps used this same image on his 1967 and ’68 cards. 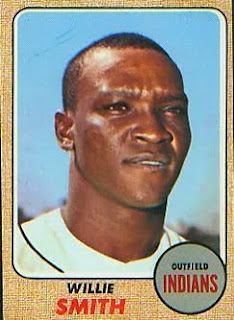 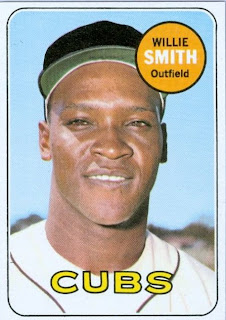 The next year they used a capped photo, but airbrushed his hat black. 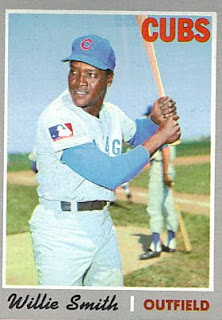 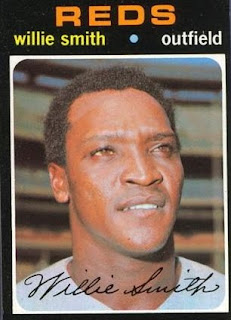 I have shown all of these for handy reference, but the actual Card of the Day is the 1967. The reason for this is simple. I owned this card (the ’67) as a young kid in the pre-internet days and it drove me absolutely insane!!! First off, as a kid I hated hatless photos, but I loved nicknames. The back of the card referred to the late Mr. Smith as “Wonderful Willie” and that outweighed the unfortunate lack of head gear making it a welcome part of my collection. What drove me nuts about this card was that the back of the card showed Wonderful Willies career major and minor league batting statistics, but the cartoons showed him as a pitcher. 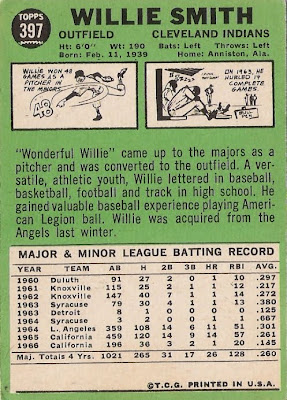 The mini bio did state that Willie came to the majors as a pitcher and was converted to an outfielder, but it was more than my juvenile brain could handle. I needed to know more and the information simply wasn’t there. I didn’t get how the cartoon that said he threw 14 complete games in 1963 AND the batting stats that said he hit .380 in ’63 could both be accurate. I mean Babe Ruth was a great pitcher and hitter, but he was pretty famous. I had never heard of Willie Smith before I bought this card for a quarter. I figured a guy who hit .380 and pitched 14 complete games would be LEGEND. I didn’t really consider that those numbers came with the Syracuse Chiefs in AAA and those kinds of numbers didn’t translate into you being a household name 20 years later. Oh well. Anyway, with the power of the internet I can call up Smith’s MAJOR and MINOR league career stats. I can see right in front of me that in 7 seasons in the minors he owned a .304 career batting average to go along with a 49-27 pitching mark. His career minor league ERA was 2.93. In ’63 with the Chiefs he did bat .380 while going 1402 with a 2.11 ERA earning himself a call up to the Detroit Tigers where he pitched in 11 games. I also learned that those same Tigers traded him to the LA Angels in April of 1964 for another pitcher with a cool nickname, Julio “Whiplash” Navarro. That year with the Angels Wonderful Willie had his most wonderful season as a 25-year-old pitcher and outfielder. He played in 87 games in the outfield that year while pitching in 15. He owned a .301 batting average with 11 homers and 51 RBI and 7 steals while posting a 2.84 ERA with 20 strikeouts. Unfortunately that was the last year Wonderful Willie spent that much time on the mound. 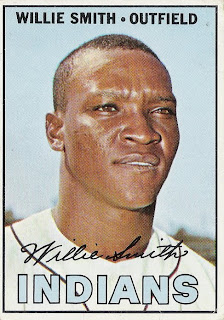 He did log 7-2/3 scoreless innings in 1968, but ’64 was the last year he really spent as a pitcher. More unfortunately it was also the last year he batted over 300. He did up his power totals in ’65-he hit 9 triples and 14 homers, but his average dropped to .261. After that he was relegated to a pinch hitting and platoon role facing mainly right handed pitchers and still not standing out statistically or appearing in more than 90 games. After being traded to the Chicago Cubs in June of ’68 for Lou Johnson he appeared in 108 games, his most since ’65, but was still mainly a pinch hitter. He did hit 19 homeruns in that role over 3 seasons and he was an important of the ’69 Cubs team that won 92 games. He was traded to the Reds after the 1970 season and played in 31 games for them hitting one homerun and appearing 10 times at first base. That would be his final year in the Majors, but he did spend two more seasons playing in Japan for the Nankai Hawks hitting 29 homers over that time. The power of the internet has allowed me to learn more about Wonderful Willie Smith, one of the last combination pitcher outfielders. I still think he deserved to be in full uniform on photo day Topps! 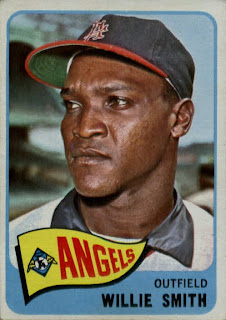 You guys got it right in '65 but seriously dropped the ball after that... Thank you to the Rod of Padrographs for sending me this gem and reminding me to do some long overdue research! Thanks for reading. 43 years LATER.
Posted by Collective Troll at 2:25 PM