The Nitty Gritty 45 Year Old Card of the Day!

Welcome! The Nitty Gritty lives!!! There is a pretty LONG post on 1965 Topps coming, but for now, here is the Nitty Gritty Card of the Day. As stated, it comes from the ’65 Topps set, card #50 of San Francisco Giants All Star pitcher Juan Marichal. The first 12 cards in this set are League Leader cards. 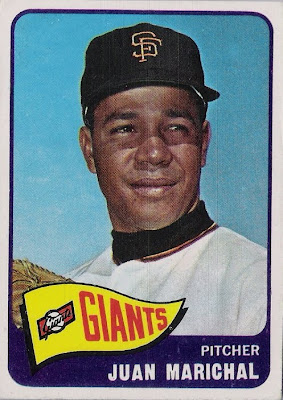 Those are littered with stars and Hall of Famers and Marichal makes his first appearance in the set this way. He led the NL in complete games, placed 2nd in wins, 4th in ERA and 7th in strikeouts. Between card #13 and #50 there are 3 Hall of Famer cards and each one is a pitcher, Marichal being the 3rd. You can view the entire '65 Topps checklist HERE courtesy of the top 1965 Topps blog on the web.
Time constraints won’t allow a proper bio, but 1965 did turn out to be a good year for Manito. He started the All Star Game, pitched 3 innings of one-hit ball and was named the game’s MVP. It was his first start (of 2) and 5th selection overall (out of 10). His career All Star stats look like this: 2-0 with a 0.50 ERA. He struck out 12 batters, yielded 7 hits and allowed one run in 8 AS appearances. For his complete pitching stats-All Star, regular and postseason-click HERE. For now, just enjoy this 45 year old beauty. The back of the card props Marichal’s 1963 no-hitter against the Colt 45s on June 15, 1963. The cartoon is PERFECT! That would be the only no-hitter in Marichal’s Hall of Fame career, but two weeks later he pitched an 8-hitter that was even more legendary. 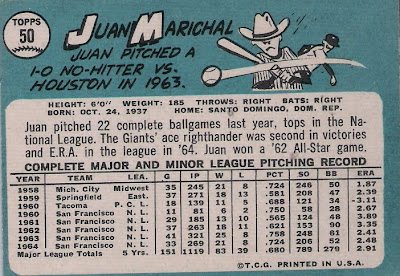 Facing Warren Spahn and the Braves in a true Ace versus Ace matchup Marichal and Spahn dueled and each shut down the opposition to a mind-boggling degree. The game lasted 16 innings before the first run crossed the plate. Marichal took the hard earned win after Willie Mays hit a game ending solo homer in the 16th inning to give the Giants a 1-0 victory. Facing Marichal Hank Aaron was 0-6 on the day. The 15,000+ fans at Candlestick Park REALLY got their money’s worth that day. Until the next card, 45 years LATER.
Posted by Collective Troll at 11:07 AM