Anyone Remember the Nitty Gritty Card of the Day??? 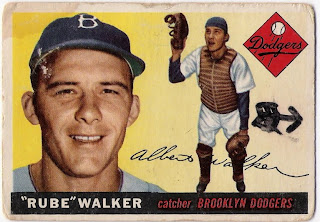 So, I have not made a post on this page since Jimmy Wilson was the Card of the Day for the months from January till July 2011. Its been a while... Two things inspired me to post here again and try to revive this dying page... First off my buddy Duane AKA the King of Allen and Ginter minis from Democratic Roadkill sent me an AWESOME package that not only included the normal super cool Allen and Ginter mini cards, but it also contained over 20 awesome Topps vintage cards that helped clear some space off of my 1963 and 1965 Topps want lists. I want to show off all the cool stuff he sent and there was a ton of it, so I thought I would post the vintage cards on this page and the other goodies over there...
There is another reason... Its Dan Rather. This Friday he wrote a story for the Nation and used an image from this very blog to illustrate it. From this post on December 10, 2010 about Dodgers back-up catcher Rube Walker. Anyway, his editor contacted me a long while back and said that Mr. Rather was planning on writing a piece on Walker. He wanted to use a card as an illustration, but wanted a well-loved card, not a collector's piece. He wanted a card with some character. So, the editor did some surfing and found the Nitty Gritty and said they thought the card was perfect. I agreed. I really love well-loved cards and for some reason really like cards that have been drawn on... Go figure, so does Dan Rather... Ha. Link to the slideshow to illustrate every article on the Nation, including Dan Rather's piece on Rube Walker - it is slide number 6/14.
Anyway, check out his story, check out the Nation, check out the slideshow and the other stories and then come back here cuz I will be posting up really soon... Like today or tonight soon. I love this hobby! A HUGE thanks to Democratic Roadkill Duane, I will be posting his generosity very soon... 50 years LATER.
Posted by Collective Troll at 5:42 PM