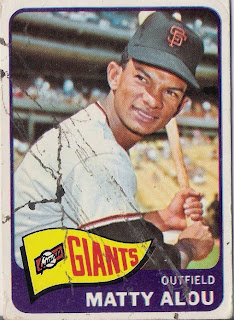 Today’s Nitty Gritty Card of the Day comes from 1965 Topps Baseball, card #318 of San Francisco Giants outfielder Matty Alou.
In 1965 Alou was in his 6th and final year with the San Francisco Giants. He broke in with them in 1960 as a 21 year old playing in 4 games. As a rookie in 1961 Alou batted .310 in 81 games for the Giants as a part time outfielder. The next year he continued to platoon and batted .292 in 78 games for the National League Champions. As the back of the card reminds us, Alou batted .333 (4 for 12) in the World Series against the Yankees.
In 1963 Matty Alou made history along with his brothers Felipe and Jesus when the 3 Alou brothers filled the Giants outfield with all 3 starting the same game. 1965 would be Matty Alou’s most active year with the Giants playing in 117 games, but his batting average dipped down to .231 and he was traded to the Pittsburgh Pirates after that season for Joe Gibbon and Ozzie Virgil.
In his final year in San Francisco Alou made his pitching debut throwing the final 2 innings of a game – he faced 10 batters, gave up 3 hits, allowed zero runs and struck out 3.
His trade to Pittsburgh sparked huge career resurgence. In his first season with the Bucs his batting average skyrocketed .111 points! From .231 up to .342. He set career highs in games (141), runs (86), doubles (18), triples (9), RBIs (27), steals (23) and batting average with his .342 mark. 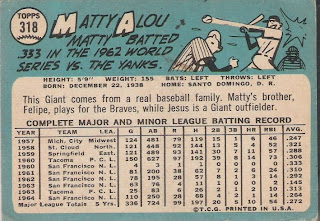 He won the 1966 National League batting crown by a 15 point (.015) margin. Second in the batting race was his brother and former teammate Felipe Alou who batted .327 for the Braves.
Matty Alou would never win another batting crown, but he had a breakout year with the Bucs in 1969 when he batted .331 with a career high and league leading 231 hits and 41 doubles. He also scored 105 runs and stole 22 bases and was the NLs starting center fielder in the All Star Game.
He would leave Pittsburgh after the 1970 season, traded to the Cardinals for Vic Davilillo and Nellie Briles. After 5 seasons in Pittsburgh Alou owned a .327 batting average. He did nearly as well in St. Louis, batting .314 over 3 seasons as a Cardinal. Matty Alou would be traded 5 times over his last 3 years in the big leagues before retiring after the 1974 season with the Padres. Along the way he stopped in Oakland and won a World Series ring with the A’s in 1972.
He retired a 15 year veteran with a .307 career batting average (134th All Time!), 1777 hits and 780 runs scored.
I believe at some point this card was used to patch a hole in someone’s roof and the tar remains on the front as a reminder. That fits in well with Matty Alou – a hardnosed, hard tar sticky and Nitty Gritty guy.
I love this game and I love this hobby! I really love this set, too. If you are so inclined, you can find my shrinking want list for 1965 Topps right here. I have dupes to trade and have a number of vintage singles that I would gladly trade for any card on this list.
Posted by Collective Troll at 3:19 PM