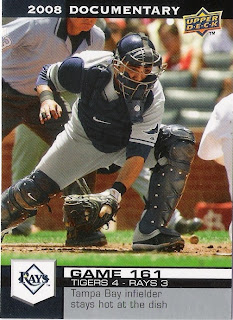 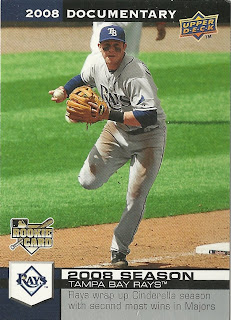 I like the future. I don't like to be complacent and expect to get by based on past accomplishments. That said - I don't wanna forget or overlook a spectacular season. 2008 was MAGIC for the Rays. I don't think that ANYONE thought there was any way in hell that the Tampa Bay Rays would find themselves in the World Series in 2008. I PLAN on my team making that far every year, but even I was surprised when it actually happened.
The Rays played in 179 games in 2008. The wife and I were out at about 30 games, but thanks to the magic of television, I believe that I saw EVERY single game that the Rays played...
That was also the year that I got TOTALLY back into card collecting. This set brings those things together nicely. This set, Upper Deck Documentary, really really sucked. It was a horrible rip and it had way too many cards for anyone to think of finishing the entire set. Retailers marked these down quickly. I took a risk and bought a single 40% off blaster and it was my worst rip of the year by far. I think of guys took the risk and tore open a discounted blaster and I was fortunate that pretty much everyone who ripped it sent me the Rays cards they pulled. It seemed that I got 2 or 3 of these in every trade I did that year. That year of blogger generosity got me this far -70% complete, but I REALLY wanna get every game. As much as the set sucked in terms of ripping packs OR trying to finish the whole set - for a team collector it was pretty cool. Especially if your team was the Phillies or the Rays and it was a season to remember.
I really like looking at the recap on the back of these cards and remembering the individual games and thinking about the players who stopped in for a short time but helped the Rays in their postseason mission.
Anyway, this is a lot of words, but what I am trying to say is that I REALLY, REALLY want to complete this set.
Including the postseason the Rays played 179 games. They won MOST of them. Sadly, they lost the last one they played...
I have been thumbing through my partial set and just did a quick count. I have 126 games - I need 53 more. Like I said, I really want to complete this one. If you have any of the games I need - PLEASE hit me up cuz I really want them. We can trade, I can pay you, I can mow yer lawn - whatever you want - just help me finish this set so I can always look back and remember that truly magical season which happened during my second year of marriage...

Thanks for reading and thanks in advance for helping me out.
Go Rays!!!! Paving the road to October baseball!