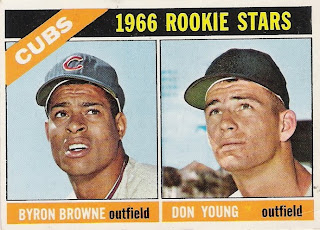 Today’s Nitty Gritty Card of the Day comes from 1967 Topps, card #139 of the Cubs’ Rookie Stars and features a pair of outfielders, Byron Browne and Don Young. If you are saying “who?” you aren’t alone. I picked this card because PERFECT GAMES have been a hot topic of late and both of these players made their major debut on the same day, September 9, 1965. That was the day Sandy Koufax was perfect against the Chicago Cubs. Don Young played centerfield and batted leadoff and made the first out in the game while Browne batted sixth and played left field and both batters were 0-3. Facing Sandy Koufax is a hell of a way to break into the big leagues!
Oh, if you think Koufax had an easy game facing two rookies, look at the box score and see the heart of the Cubs order with Billy Williams, Ron Santo and Ernie Banks! That game was pretty significant for a lot of reasons. First, I believe that was the last time that the Cubs were no-hit, 45 years ago. Second, the losing pitcher in the game Bob Hendley pitched a one-hitter and lost. I believe that the total of 1 hit for both sides is the lowest hit total in a 9-inning game. Going into the 7th inning both hurlers had no-hitters going. The lone run that the Dodgers scored was unearned. Lou Johnson reached on a walk, was sacrificed to second, stole third and scored on an errant throw by catcher Chris Krug. Dodger’s left fielder Lou Johnson, who scored the games only run also broke up Hendley’s no hitter with a double. The perfect game was Koufax’s 4th no hitter and his 14 strikeouts were the most in a perfect game. The two pitchers had a rematch 5 days later and Hendley came up ahead, winning the game 2-1 and allowing just 4 hits. 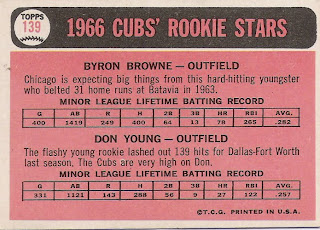 Koufax’s perfect game was Byron Browne’s lone start of 1965; he appeared 3 other times as a pinch hitter without success. The following year he was the Cubs regular left fielder; he hit .243 with 16 homers and 51 RBI and was a member of the Topps All Rookie team. He also led the National League by striking out 143 times.
Don Young was only 19 in ’65. He spent the entire season in AA where he hit 16 homers with a .273 batting average and earned himself a September call-up. He didn’t fair too well either. In 35 at bats he managed just 2 hits for a .057 batting average. One of the hits was a 2-run homer though. Young wouldn’t see the majors again until 1969 when he had 236 at-bats for the Cubs. He played a few more years in the minors before retiring at age 25 after batting .119 in AAA.
Every card has a story. I love this game, I love this hobby! Thanks for reading, 43 years later.
Posted by Collective Troll at 2:27 PM