A Story About My Family, Baseball and Tony Lazzeri 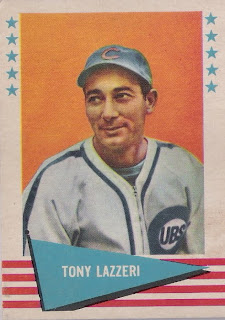 Yes, I am Italian. I am Mexican and Irish, too, but on my Mom’s side it is 100% Italian. Her mother and her parents arrived in Ellis Island from Sicily in 1928. A group of 16 family members including my Grandmother who was a young girl. When my sister lived in New York she was able to get a copy of the “sign-in sheet” from their arrival. The Tucciarone family settled in Bridgeport, Connecticut and most of their children remained there as adults. This country was super racist back then and many races of people were hated. It was not uncommon to see signs that said things like “No Italians Served” or worse. There were also many small communities that welcomed Sicilian immigrants. My family adjusted quick and became involved in construction and did well for themselves. They also became big baseball fans. The quickest way to Americanize was to learn their pastimes and baseball was huge in the 1920s. My family immediately adopted the New York Yankees. Not just because they were the best at the time, but because of their second baseman, “Poosh Em Up Tony” Lazzeri. He became the household hero. I am told that a photo of him hung on the wall with the rest of the family photos in my great-grandparents home. He was a pitchman for Lucky Strike and because of that, the whole family smoked and smoked Luckys. 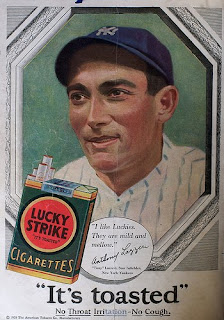 All of the Tucciarone kids were huge Yankees fans. This 1961 Fleer Baseball Greats is the only card I have of Tony Lazzeri, but I wouldn’t mind tracking down some more, especially the Diamond Stars card I show at the bottom of this post. He paved the way for many great Italian-American Yankees like Frank Crossetti, Yogi Berra and Joltin Joe DiMaggio, but he also made my own family feel at home. My Grandma Philomena loves the Yanks and she took me to my first game at the Stadium in 1981. They weren’t too good then. She took me to many more games from 1981 up till 1993 when I moved away. They were never very good. I never liked them either. I was that rare kid who grew up between New York and Massachusetts who didn’t like the Yankees or the Red Sox. 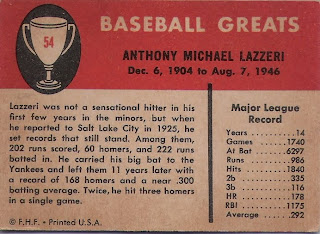 I hated both teams, but I loved the times I spent with my family at Yankee Stadium. My Grandma took me most often. We rode the train to New York and took the subway to the Bronx to get to the Stadium. We never drove in a car. There were a few times that my Great-Aunts and Uncles would come, too. I will never forget going to the stadium in the mid-80s with my Uncles Julius and Jack and my Aunts Edna, Rita, Eleanor, Lena and my Grandma Phil. In the late 80s when Steve Balboni returned to the Yankees we went to a lot of games. My Uncle Julius was a big Balboni fan. He was big guy period. So was Balboni. He called him Baby Babe. We were there when big Steve hit a homer and you would have thought it won the WS the way my family carried on. He had loved the Yankees since he was a little boy and Tony Lazzeri was still winning World Series with the Yankees. He cheered for Frank Crosetti, Phil Rizzuto, Yogi Berra and Joe D and he kept on cheering for Dave Righetti, Joe Peppitone and Joe Torre. 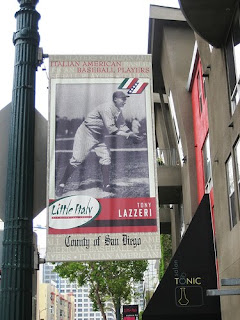 Had he still been alive he would be nominating Joe Girardi for sainthood right about now. Much of my family (on both sides) were involved in politics. Uncle Julius was, too. When he passed away at his funeral there were 3 photos above his casket. He and Frank Sinatra, he and Joe DiMaggio and a photo of him and John F. Kennedy. Everyone there knew who Joe Dimaggio and Frank Sinatra were, but I heard a lot of people ask who that other guy was with Julius in reference to Kennedy. That was a long story for a little card, but I wanted to explain where my love of the game came from. I do thank my Mom’s side of the family for sharing their love of the game with me and taking me so often to the House That Ruth Built. They always called the Yankees our home team. I disputed this once because we lived an equal distance from Shea Stadium and Fenway Park. The response was “This is where we are, this is our home team”. Fair enough. I did take in plenty of games at Shea and Fenway and even Olympic Stadium, but when I was with a Tucciarone, we were always home at Yankee Stadium. 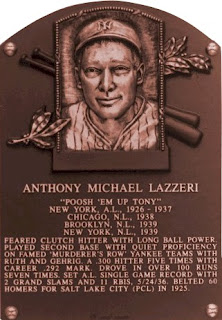 Moving back to Tony Lazzeri… He played in the big leagues for 14 seasons from 1926 until 1939, mainly for the Yankees, but also with the Cubs, Dodgers and Giants. He hit double digits in triples six times and topped 100 RBI 7 times. He went to 7 World Series, six times with the Yankees and once with the Cubs against the Yanks. He was on the winning side 5 times. He was an original All Star in 1933 and received votes for American League MVP in 5 different seasons. His best year statistically came with the Salt Lake City Bees of the Pacific Coast League in 1925. He batted .355 with 60 homers and 222 RBI. 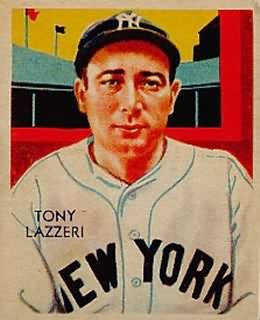 He had 512 total bases that year! At the big league level in 1929 he hit .354 with 18 homers and 106 RBI. He drove in runs from the top of the order on the powerhouse Yankees teams of the late 20s and was the smallest member of Murderers Row. His highest All Time ranking is in triples. He sits at 108th of All Time with 115 3-baggers. He was elected to the Baseball Hall of Fame in 1991, 45 years after his death. The Veterans Committee realized what my family knew all along, that Tony Lazzeri was a hero.
Posted by Collective Troll at 9:17 PM