Today’s Nitty Gritty Card of the Day is from the colorful and psychedelic 1975 Topps set, card #555 of Pirates outfielder/first baseman Al Oliver. 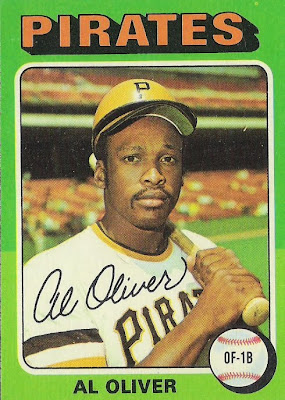 I don’t know if anyone has noticed, but the last 3 cards I have posted have been from the 70s. This will be the last one for a bit. It will probably be the last ’75 card ever. I prefer to leave that set to the experts. I was sorting, found this and A) Oliver is a favorite player of mine. B) He is one of the most underrated hitters out there and C) This is by far the sharpest ’75 Topps card I have ever owned, perhaps even seen. It looks like a reprint and honestly I don’t know how I got it, where it came from or why I got it… It is a mystery card. 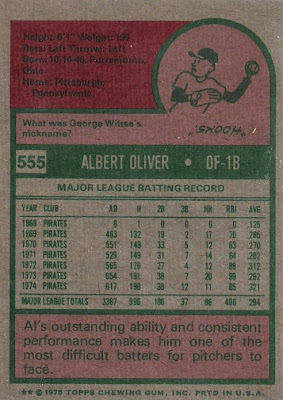 Scoop was one of the top hitters of his generation, but he lacked a defined position, splitting time between left field, right field, first base and designated hitter which require higher power numbers and center field which requires higher stolen base totals. His versatility costs him being remembered as a great at one position, but he does stand out as one of the greatest hitters of his time. He is a rare player who won Silver Slugger Awards at 3 different positions. He is in the top-50 All Time in both hits and doubles. He was an All Star 7 times, a World Series Champ and a batting champ who topped the 300 mark 12 times and holds a .303 life time batting average. For more 1975 Topps click HERE and for Oliver’s career starts click HERE. 35 years LATER!
Posted by Collective Troll at 10:48 AM