The Nitty Gritty on Card #12 of Don Aase!

Time for card #12 of pitcher Don Aase, the man at the forefront of the alphabetical order. I LOVED this card as a kid; it made me want to see Aase pitch. I figured if he looked this good on the card, he must have been one heck of a pitcher. I didn’t like the Red Sox at all as a child, I still don’t, but I sat through plenty of Red Sox games hoping to see this guy pitch as a 5-year-old. I think I watched a week’s worth of games and ended up learning a lot about the Sox. That was the first time I had really watched their epic outfield of Dwight Evans, Fred Lynn and Jim Rice, but I became fascinated with their infield of Rick Burleson and Jerry Remy more. I gave up the Sox watching experience after a week went by with no Don Aase. I think I forgot about his awesome card, too. It all came back to me when I got a copy of his ’82 Topps card, though, and I realized he had been traded to the Angels before that card had ever come out. Turns out he was traded for Jerry Remy. Remy would be an All Star for the Sox, but Aase led the Angels to their first Western Division Title in 1979. This card came out after Aase’s rookie season where he posted a 6-2 record in 13 games, all starts, for the Red Sox. It was his 3rd Topps card and probably the coolest. Aase had been exclusively a starting pitched from ’77 till 1981 when he switched to the bullpen.

He served as the Angels closer for 3 years and saved 23 games over that period and then left California to sign a free agent contract with the Baltimore Orioles where he joined their pen in ’85. He enjoyed one of the best years of his career; he had a 10-6 record with 14 saves in 88 innings of work. The following year he would become the Orioles full-time closer and would go to the All Star game.

What I think about this card now: It’s perfect. Not much funny to say, this is just good photography…
Back of the card memorable moment: His Major League debut was against the Brewers on 7-26-77 and he fanned 11 batters to win the game 4-3

Back of the card “fun fact”: Don won his first 3 decisions for the Sox in 1977.
The condition: MINT
Grooviness factor: The moustache, high stirrups, and crazy looking delivery.
Wow! Factor: That the Sox would trade a promising young starter for an infielder.
What’s weird about this card: He has the number 13 written on his stirrups. 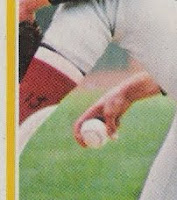 Career Accolades: All Star in ’86, earned save in the game. 161st All Time career in Saves. Was Orioles single season saves leader till Greg Olson saved 36 in 1990.

Best Season: 1978- Was 11-8 with 6 complete games.
Nitty Gritty Fun Facts: Traded for Jerry Remy after 1977 season. Is 4th among baseball players when listed All Time in alphabetical order.
Where are they now?: His son Kelby Aase plays college ball at Fullerton College. Where’s Don? I really don’t know…
I have to say that I blame Don Aase for making me waste time watching the Red Sox as a kid, but it’s probably not really his fault. It is the power of baseball cards. This card is awesome and I stared at it and it made me want to watch this guy play, that is the point, right? On deck is card #lucky 13, of Astros infielder Art Howe. Two things, real quick... I DO plan on posting 5 times a week from now on, but it would be nice to think people were reading, PLEASE consider adding this to your blog rolls! When it hits 25 followers, there will be a (simple) contest, along the lines of pick a number between 1 and 25 and there will be 1978 related prizes...Stay tuned. 31 years, LATER!
Posted by Collective Troll at 11:52 AM