Now this is a great example of why I love this set! The odd pose, the abundant lip fuzz and the odd shadows all come together on a card of the great young stars of this time. This is card #9 of Baltimore Orioles third baseman Doug DeCinces. The phrase “between a rock and a hard place” sums up DeCinces’ early years with Baltimore pretty well. Coming up through the minors he was a middle infielder, primarily a shortstop, but he wasn’t going to displace Gold Glover Mark Belanger any time soon, so the transformation was made. He had a great arm-as a 19-year old, in his first season in the O’s organization, he made 1 start for Bluefield in 1970 and during spring training in 1974 Bill Hunter and Jim Frey approached him and said they thought he was the one to replace Brooks after his retirement. DeCinces didn’t play third base until his 4th season in the minors, but he took to the position quick and discovered some power that he hadn’t exhibited before. 1974 would be his final season in the minors, he would spend most of 1975 on the bench, but in late May of 1976, he took over as the Orioles starting third baseman, the heir to the throne. Come opening day in 1977 the Orioles infield would consist of Lee May at first, Billy Smith at second, Belanger at short and DeCinces manning the hot corner. As the full time starter he set new career highs in every offensive stat and batted .259, his career average. He also chipped in 19 homers and played an above average third base and the Orioles would remain in contention all year, finally finishing 2.5 games out of first place in the AL EAST. DD would remain the Orioles constant at the corner for the next 4 seasons and in 1978 he would lead the team in homers with 28 homers. In 1979 he hit one of the most memorable homers in team history. It was June 22, 1979 and the Orioles were down 5-4 in the bottom of the ninth. The Orioles had been riding a 6 game winning streak, but Detroit Tigers pitcher Dave Tobik had two outs in the ninth inning and one batter left to face. That batter was Doug DeCinces and he creamed a two-run homer to make the Orioles walk-off winners. From that special homerun, the term “Orioles Magic” was born, a term still used today, stemming from a game that O’s fans still reminisce about. The Orioles went on to win the AL Flag that year, but fell to the Pirates in a hard fought 7 game Series. In a bit of irony, the man who replaced Brooks Robinson would be replaced himself by a legend in the making.

After a 13 homer year in 1981, the 31 year old DeCinces was sent to the Angels for Dan Ford to make room in the infield for Cal Ripken Jr. DeCinces went on to have a career year in California winning his lone Silver Slugger Award and making the playoffs, but he missed out on the World Series in 1983 with the Orioles. Now onto…

Number of Topps Base Cards: 15
Playball! Base on balls
1977 Stats Line: .259 / 19 homers / 69 RBI
Awards in 1977: The starting 3rd base job.
Distinguishing Feature: Giant ‘Stache in Orioles orange.
Similar Modern Player: Hank Blalock
What I said about this card then: What is he doing?
What I think about this card now: What an amazing ‘stache!

Grooviness factor: The giant stache matches his uniform and he seems to be scooping up his team’s name.
Wow! Factor: This guy replaced the most beloved Orioles player ever, then was replaced himself by another beloved Oriole, Cal Ripken Jr…
What’s weird about this card: The shadow monster….
Career Accolades: Is a member of the California Angels and Baltimore Orioles All-Time Teams. Inducted into Baltimore Orioles Hall of Fame in 2006.
Where are they now?: Mr. DeCinces owns DeCinces Properties, a real estate development firm in Irvine, CA. Manages Strawberry Farms Golf Club, runs 8 restaurants and still builds and develops homes in Southern California.
Career Stats: .259 batting average, 237 Home Runs and 879 RBI.
Nitty Gritty Fun Facts: Was on the cover of Sports Illustrated on October 20, 1986. 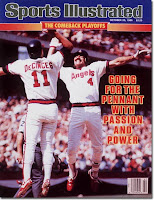