Nitty Gritty Old vs New-or the Clairvoyance of Topps

Welcome to the Nitty Gritty Old vs. New. Today’s pairing is card # 291 from 1960 Topps of Bob Keegan going head to head against #291 from 2009 Topps Heritage of Ubaldo Jimenez. 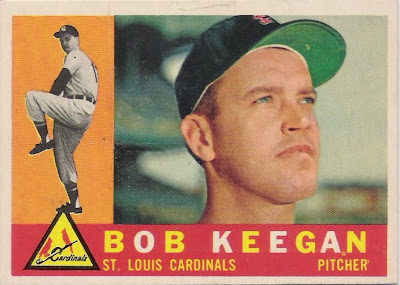 Last year this card pairing didn’t make so much sense to me. Bob Keegan of the 1960 St. Louis Cardinals and Ubaldo Jimenez of the 2009 Colorado Rockies. Both are right handed pitchers for National League teams, but that was about it. Actually it didn’t even go that far. Keegan spent two seasons playing for the Rochester Red Wings (AAA) at the tail end of his career. They were the Cards AAA affiliate but he never threw a pitch for the Cardinals. There are more differences between the two. Keegan was an All Star in 1954 when he went 16-9 for the White Sox. 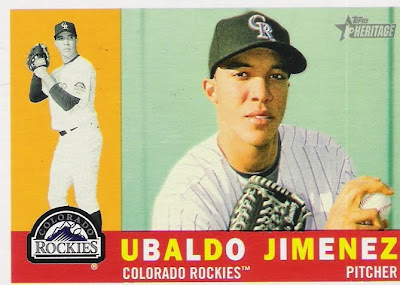 Jimenez had never been to an All Star game. Bob Keegan was most famous for his no-hitter against the Washington Senators in 1957. Last year Jimenez was most known for helping the Rockies to the World Series in 2007. Keegan never made it to the Series. Bob Keegan spent time in the Army Air Corps before hitting the big leagues. He was a rookie at 32. Jimenez began playing pro ball as a teenager and made his MLB debut at 22.
The pairing seemed odder at the end of last season when Jimenez struck out as many batters in 2009 as Keegan did in his entire career. 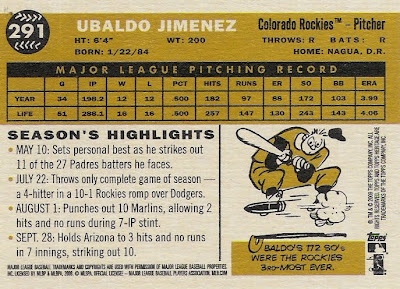 Now it makes more sense. The folks at Topps are clairvoyant. With his 7 wins Jimenez leads the National League and will probably start this year’s All Star game, so they have something else in common. Earlier this season Jimenez no-hit the Atlanta Braves to give them another thing in common. It all makes sense now. These righties have completely parallel careers. I don’t know how Topps knew that it would turn out this way, but it has. 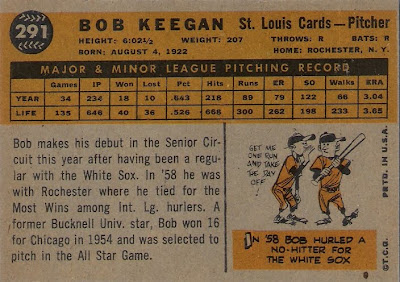 At just 26 years old, I think Jimenez is just getting warmed up. 1960 was Keegan’s final year in pro baseball. He was 38 and he spent the year in the minors. I think that Jimenez will outgrow the connection, but for now it makes perfect sense. Vintage always wins in this game, but I think that Jimenez will win out historically. His star is definitely shining bright right now, but you never know where the next pitch will end up. I love this game, I love its history. I really love this hobby! Thanks for reading! LATER.
Posted by Collective Troll at 6:10 AM