Warren Spahn is Larger Than Life

Wow, the class of players being shown as the Nitty Gritty Card of the Day has been pretty great of late. Roberto Clemente, Ted Williams and Mickey Mantle have been the last three. Talk about a PERFECT outfield… 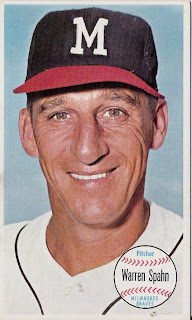 We are gonna keep going in that same direction, but instead of sluggers, we are going to switch gears to one of the greatest pitchers to ever throw a baseball. Regarded by many as the greatest left-handed pitcher of All Time. He is at least the winningest. I am speaking of the late, great Warren Spahn. He is shown here on card #31
In 1960 Spahn earned his 20th victory of the season in style, no-hitting the Philadelphia Phillies. He then no-hit the San Francisco Giants the following season. In 1963 he finished the year with a 23-7 mark, including his 350th win, which is celebrated on the back of this card. He would finish his career with 363 victories against 245 losses in his 21 year career. He topped 20 wins a season 13 times and led the NL in wins 8 times. He was an All Star 17 times and was the NL Cy Young in 1957-his Braves were World Champions that same year. 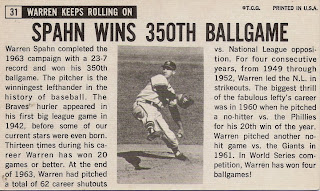 The following year the Braves fell to the Yankees in the Series despite Spahn pitching 2 complete games, one of them a shutout. He also got it done at the plate that Series, batting .333 with 3 RBI. Over his career Spahn batted .194 with 35 homers and 189 RBIs. Infielders have had long careers with numbers worse than that. I could go on, but the short of it is, there will never be another Warren Spahn. 363 wins? Never again. He pitched 382 complete games and 63 shutouts. No one is gonna get close to those numbers ever again. The guy won 75 games AFTER turning 40. He was flat out amazing. I really love this set. 46 years, later!
Posted by Collective Troll at 6:05 AM