Moving right along, here is card #2 in the ’78 set. Now I didn’t grow up in a Yankees household (fortunately) but living in Connecticut there are even more Yankees fans there than in Tampa. My parents were not Yankees fans, but my Mom’s Mom, my Gramma Phil and her family were huge Yankees fans. At Thanksgiving Dinner, the Yanks were often a topic of conversation and as a young collector looking for guidance on who to follow, my Great-Uncles were glad to give me advice. Had I taken it over the years, my collection would revolve are Steve Balboni, Mike Pagilarulo, Ron Guidry, Dave Righetti and this guy, Sparky Lyle. Albert “Sparky” Lyle was a favorite around the Tucciarone household and when the Yanks won it all in ’77 and he was a big part of that, he was anointed as a Saint by them. He had a spectacular year with the Yanks in ’77, he was an All Star, he won the Cy Young Award and he was lights out in the World Series. His final record in ’77 was 13-5 with 26 saves and a 2.17 ERA. He led the league in games (72) and games finished (60) and he pitched a whopping 137 innings, all in relief. He came to the mound in the late innings to the tune of “Pomp and Circumstance” and was sometimes driven to the mound in a pinstriped car, it was New York, it was ridiculous, but this guy delivered. This card celebrates Lyle breaking the record of most games pitched in relief. The headline reads “Lyle hurls in 621 games, all are in relief”. According to the card, the record had previously belonged to Bob Locker who pitched in 576 games in relief. Of course this record didn’t last long at all. 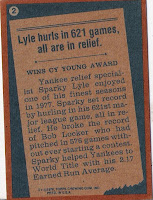 When Lyle retired in 1982 after 16 MLB seasons, Goose Gossage had already broken his record. Lyle is still in the record books, just much further down the list. His 899 games is good for 23rd All Time and is just 7 games less than Cy Young had, who is 22nd place. The difference is Young’s games came mainly from starts, he started 815 games, pitched 749 complete games and threw 5,964 more innings than Lyle. The career leader in games is lefty Jesse Orosco with 1,252. Trevor Hoffman is the active leader with 985 (15th place).
Following Lyle’s record breaking, Cy Young Award winning, World Championship performance in 1977, the Yankees signed free agent Goose Gossage who took over the closer role for the Yankees. In ’78 Goose had 27 saves, Lyle had 9. After the ’78 season the Yanks traded Lyle to Texas. I think that it was Graig Nettles who coined the phrase “From Cy Young to sayonara”. Yet another reason to hate the Yankees-historically they just don’t take care of their players… Sparky didn’t have much spark in Texas and left for Philadelphia where he saved just 6 games over 3 seasons. He made one final stop in Chicago with the White Sox in 1982. He tossed 12 innings for the Sox and saved one final game and retired at age 37. He ranks 32nd All Time in saves with 238. He was passed on the All Time list this year by Francisco Cordero, K-Rod and Joe Nathan. My family felt that he was a sure fire Hall of Famer, but it hasn’t happened for him just yet. He still does have hope as he is on the Veteran’s Committee ballot along with names like Minnie Minoso, Ron Santo, Roger Maris, Luis Tiant and Gil Hodges. Aside from hearing how great he was from my family, Sparky Lyle was most famous to me for writing the book “The Bronx Zoo” which I read after his retirement and have re-read a few times over the years. Sparky is currently managing the Somerset Patriots of the Atlantic League. He has been their Skipper since their inaugural season in 1998. Going back to the card-I do love that Topps used a shot of Sparky in action, on the mound. 30-years ago my eyes were much better and his moustache jumped out at me, 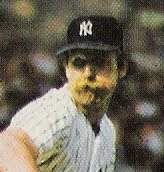 now I have to squint to see it, but its there! I am confused by why Topps had to say “Most games, pure relief”. Are there different types of relief or games? Are relief appearances sometimes cut with starts? Was this a common practice in the 70’s? Just throwing that out there… Although not as “far out” as 1975, in ’78 things were still a little far out there…Congrats to Sparky Lyle on holding onto history, even if for just a short time… Guess which card number comes next?
Posted by Collective Troll at 11:34 AM